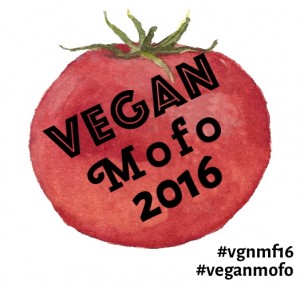 Today’s prompt is “Goth Day – Blues, purples, blacks? Let your dark side shine.” So because it’s the weekend and I had to get up at 5 am to pick up Steven from the airport and I’m sleepy, I’m going to share a simple roundup of brownie recipes. Brownies: dark and delicious. (Plus, many of these are from MoFos past — it’s like a trip down memory lane!)

First up, these black bean brownies I developed a few years back, when I was sharing nutrient-rich recipes for Vegan MoFo 2014. Although I still think putting beans in dessert is a bit of a precious foodie trend, these were surprisingly fudgy and tasty. Plus, you get 7 grams of protein in each square. Win!

Next, how about the brownie recipe showdown from Vegan Mofo 2011? Yeesh, that was five years ago. The world of vegan baking has evolved pretty substantially since then, with the introduction of new commercial egg substitutes, lots of new plant milks, and the discovery of aquafaba (praise be unto you, bean juice!).

In fact, my current favorite brownie recipe takes advantage of black bean aquafaba and is incredibly rich and delicious — you can find it here. I’ve subbed out other neutral oils in place of the coconut oil to no ill effect. This recipe is particularly great if you want a crackly top. Mmm.

Or perhaps you want something with a little fruit. How about Isa Chandra’s raspberry truffle brownies? Somewhere between fudgy and cake-y, these brownies are oil-free as written… but I cheated and used an oil/applesauce blend when I blogged about them during Vegan MoFo 2012.

So… what’s your favorite brownie recipe?

Well, we weren’t *intending* to add a third dog to the pack, but then we decided to foster this nugget through @homewardtrailsrescue, and, uh, things escalated quickly. When you know, you know. 💕 Welcome to the family, Franny! #4000beagles #adoptdontshop #fosterfail #envigobeagles #beaglesofinstagram
Betcha didn’t expect a back-to-school pic from this gal! 🍎 ✏️ 📚 But here I am, on day one of my masters program. 🤓
Belated snaps from Colorado! 🏔 Almost too much fun with my fave kiddos.
Happy Lughnasadh (or Lammas, if you prefer)! We’re halfway between the summer solstice and the autumnal equinox, and it’s time to celebrate the beginning of the harvest. 🌾
Sure, your friends might be “adults” who are “mature” and “successful,” but if they won’t play ridiculous and childish games in a lake with you in the middle of a hot summer day in Minnesota, then like, what’s the point? #crappiefest
Forever grateful that my high school-era love of Lord of the Rings led me to join online LotR-themed journal rings, which led to meeting @anyamontanya, which led to learning about @carletoncollege right when I was applying to schools, which led to attending Carleton and meeting these other two fools freshman year on our substance-free floor (lol), which led to lifelong friendships, which led to a very nice long weekend in Chicago earlier this month. 😂 #chicago #latergram #beanselfie
Mattie says goodnight. 💕
Five humans, one dog, four-ish days, zero group photos. 🙄 We missed you, @kdubois215! Covid can suck rocks!
🌸🌼🌸