Day 26: It’s cold and rainy and there’s a snow drift outside your door!

I had to set some ground rules for this prompt, though. Roots Market — one of my favorite local grocers — has been celebrating its “grand reopening” throughout the last week, and they’ve been running some great sales. I headed out to Clarksville to stop by and pick up some goodies, like Califia Farms almond milk (two for $7!) and a few Gardein items (buy one, get one free!), along with a pound of organic almonds (on sale for $5.99/lb!). But I didn’t think it would be fair to include anything I bought today, since I wouldn’t have been able to make it out of the house with that big ol’ cold/rain/snowdrift keeping me in. Instead, I used ingredients I already had to put together a super simple, super comforting kale and yellow split pea soup. 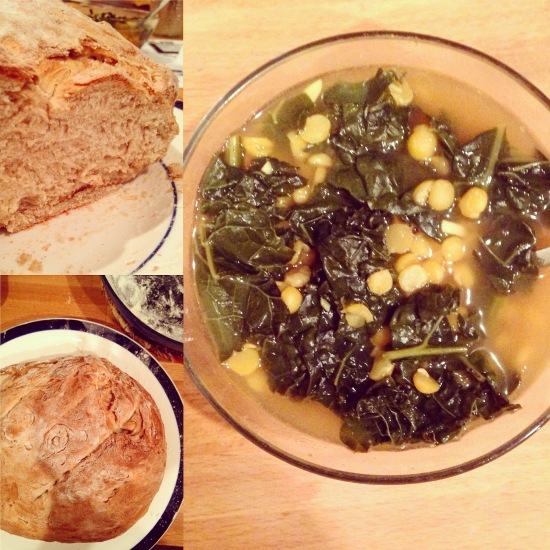 Truthfully, I didn’t measure everything I put in this soup. If I were snowbound, I likely wouldn’t be worrying about keeping track of everything! And in a soup like this, the proportions don’t really matter; you can’t go wrong. This particular soup was nice and brothy, with lots of kale. Roughly, here’s what went in:

This is exactly the type of thing I’d make on a snow day! I’d also whip up a loaf of crusty homemade bread — because what could be better than hot straight-out-of-the-oven bread when it’s cold outside?! Today, I used this recipe, because I wasn’t in the mood to knead the dough. I don’t have a Dutch oven, so I cooked it in a cast-iron skillet instead. And I didn’t include any herbs because I wanted a simpler bread. It was so simple and surprisingly good. Again, perfect for a snow day! (Or, y’know, a somewhat cool early fall day. Same thing?)

🍁🔥🍁 Fire pit weather! 🍁🔥🍁
I roundly reject the notion that my ~cAnCeR jOuRnEy~ taught me anything, but I do acknowledge that I’ve consciously chosen to extract some bits of meaning from it and that I’ve chosen to realign my priorities in small and subtle ways in the past year. I’ve also re-examined my natural inclination to plan for the future, to save my pennies and pass up the small indulgences in favor of nebulous future large indulgences. Because, sorry folks, the future is not guaranteed, and those large indulgences… you might not get to enjoy them. 🤷🏻‍♀️ It’s cliche as hell to say, but there it is.
It’s my #cancerversary today! (That exclamation point is doing a lot of work there.) @stevenyenzer and I took the day off and drove up to @vegantreats and picked up this cake because if there’s one thing I’ve learned from the internet #cancerfam, it’s that you celebrate any time you can after a cancer diagnosis! (Shout-out to @thecancerpatient and @ohyouresotough and @cancerforbreakfast for making cancer a little bit less scary and lonely.) I choose to commemorate today—the day every single bit of my life shifted so very much—and I also plan to celebrate the day I finished active treatment in May.
A Halloweekend for the books! 🎃 Surprise visit from @thegrandem, spooooky gift exchange and virtual costume party with the Carleton gang, and the first annual Gingko Gathering (complete with cyanotype leaf prints)! 🍂
Forget Valentine’s Day—Halloween chocolates are what it’s all about! 🎃 Thanks for the sweet treats, @stevenyenzer. 🍫 (P.S. They came with adorable stickers too. @vegantreats always kills it!) 👻
Made #vegan buchteln using @seitanismymotor’s excellent recipe to celebrate German week on @britishbakeoff! They are soft, pillowy, just-sweet-enough little yeasted buns. I filled mine with my dad’s homemade blueberry jam.
Today is metastatic breast cancer awareness day, but you probably didn’t know that. Corporations love to slap a pink ribbon on whatever product they’re hawking during the 31 days of breast cancer awareness month, but rarely do they make substantive donations to organizations that actually fund cancer research—and most of them will not mention anything about #metastaticbreastcancer.
Lotsa solid brews at #snallygaster this year! 🍻 (Also, post-chemo hair reminding me why I loved a short cut back in the day!)
10 years (plus a few days 😬) ago, @stevenyenzer and I went to a @shelterfromthestormrescue adoption clinic in Madison. I knew I wanted a dog but wasn’t sure how to choose among all the cuties needing homes. The clinic was held at a Petsmart and it was busy—lots of barking and laughter and whining and general loudness. Pups jumped up on their enclosures, asking for attention. Who to pick?! And then I saw the littlest Ewok-with-a-smidge-of-Wookiee sitting quietly in a corner, out of the fray. An occasional wallflower myself, I felt for her. Steven and I took her from her pen and sat in a corner with her, petting her gently and feeling her out. Then, suddenly, all the other dogs started barking at once, startling both me and my little Ewok. Scared, she hopped into Steven’s lap for protection. And that was it—she was ours. ♥️