Hello from Asheville, North Carolina! We’re here for the weekend and having a fantastic time in this dog-friendly, vegan-friendly city. I’ll have all sorts of exciting food to talk about when I’m back, but for now, how about some simple bar snacks?!

During our first full day in Asheville, we paid a visit to the Wicked Weed Brewpub, a sprawling establishment with a restaurant, beer garden, bottle shop, and on-premises brewery. Something for everyone! We were there around 2:30 p.m. and had 7 p.m. dinner reservations elsewhere, so we decided a liquid lunch was ideal. :) We headed down to the basement-level outdoor beer garden, found a few empty spots at a table, and perused the menu. 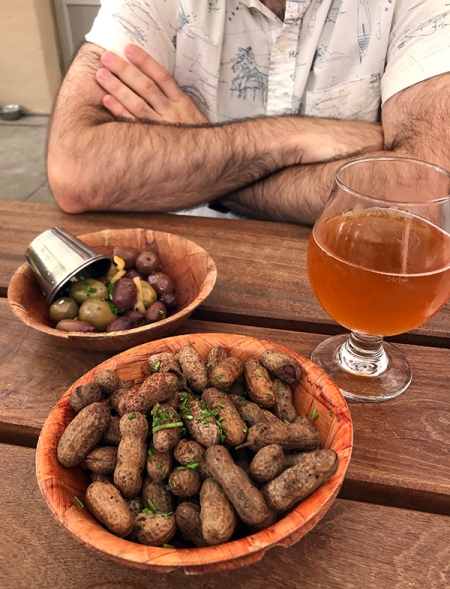 I’m a fan of sour beers, so I had the Sandiaca (barrel-aged in gin barrels with watermelon and basil) and the Floresca (tequila barrel-aged with peaches and pink sea salt). While they were both tasty, I really enjoyed the former. I can drink those juicy sours all day long! (Though that might not be a smart move: The Sandiaca was 9% ABV!) Steven stuck to a pilsner and a grapefruit radler, but we both enjoyed some simple salty bar snacks on the side: marinated olives and boiled peanuts.

I’ve never had boiled peanuts (a Southern mainstay, apparently) before but really enjoyed them… until we found an unsavory, unmentionable, un-foodlike bit of detritus in our bowl of peanuts. Y’all. It was nasty. I won’t go into details, and you should thank me for that. I’m not one to complain about food at restaurants, but I did tell a staff member about this particular issue. After one look, he rushed our bowl away, and we looked on as he showed multiple other staffers, who were all equally horrified. We got the peanuts taken off our menu and got a round on the house, so all’s well that end’s well. Top-notch customer service wins the day!

Unfortunately, I think I’m put off boiled peanuts for the foreseeable future. Although our little bit of extra disgustingness probably came from their kitchen and not the peanuts, I’ve now got a strong visceral, visual association between it and boiled peanuts. And here I was, thinking I’d found a new favorite snack. Alas.

Sibs reunite; take to the streets
My parents visited a few weeks ago! We wore hats!
Shhh, nobody tell this 17-year cicada that kale isn’t trendy anymore. 🙄
I’m learning that healing from medical trauma is not linear but I’m committed to finding moments of joy as I navigate this new normal. I petted a dog at a native plant nursery and that was pretty great. My yard is full of plants that nurture wild creatures and that is also pretty great. I ate a chocolate-peanut butter brownie and, yep, that was pretty great too.
Here I am, at my final chemo infusion last week on 4/20 (👀), with a ginormous stash of notes, cards, and all sorts of goodies from colleagues and friends, collected by @stevenyenzer and slipped into my chemo bag. It has been tough to go through 95% of my appointments and treatments alone. Sometimes I see photos of folks going through cancer treatment in years past, mask-less and sitting in the infusion room with loved ones by their side to adjust the ice blocks on their feet or hold their hands or just provide a quiet, supportive presence, and I feel sad and angry and cheated of that experience. But gifts like these are a presence of their own. I asked that day’s infusion nurse, Anna, to snap a photo of me with all these cards and she said she’d been smiling watching me go through them. So, my dear friends, know that you brought joy to more than one person with your thoughtfulness. ❤️
Happy Fosterversary to Lil Miss Snaggletooth Sneeryface! The second pic shows the first time she ventured out from her hiding place under the bed the day we brought her home. She’s been a sweetie from day one. 🐈
Lil sprawler. 🐱
Sooo I got one of those ubiquitous chemo caps from a lovely seller on Etsy. 😬 It definitely screams “CANCER PATIENT” but you know what? It’s super comfy and very useful for these early spring days when a knit hat is too toasty but a bare head invites chills. So I’m embracing it, and pretending it maybe looks glamorous with sunnies? 😎 (Glamor possibly negated by my giant fluffy jacket.)
Nature walks with Rosie (and skunk cabbage!). 🌱