Today is Steven’s birthday! As such, I asked what kind of cake he wanted. The answer: German chocolate.

And thus, this beauty.

I’m pleased to report that it tastes as good as it looks. I used this recipe from Loving It Vegan, with just a few modifications:

In other food news from the day, Steven’s mom and stepdad came over for a low-key celebration and brought us Impossible Whoppers! Did y’all see the ridiculous vegan drama that developed last week when the Whoppers were introduced nationwide? It made me want to tear my hair out.

On the one hand, I get it: It really, truly sucks that Impossible Foods was required to test on animals to get their burger approved. And if you’re concerned about cross-contamination, you have to take the extra step of asking them to cook it separately. And, of course, you may not want to support Burger King at all. (I will not defend the “BuT iT’s PrOcEsSeD/gMo!11!1!!!” argument, however.)

But… I don’t see how this is not an unqualified Good Thing for animals on a macro scale, not to mention the environment. Anecdotally, I’ve seen so freaking many omnivores saying they’d happily order this rather than a beef patty. We’re normalizing the term “plant-based” along with plant-based products themselves. We’re showing that vegan food can be just as good as (if not better than) animal products.

So like… if you don’t feel that the Impossible Whopper fits with your personal ethics, that’s fine! I get it! Don’t buy it! But don’t spread your negativity all over the internet. You’re (1) giving vegans a bad name, making us seem like Negative Nancies who have achieved a level of moral perfection nobody else should even consider trying to reach, and (2) marring what should be good news with manufactured outrage.

As for me, I can’t see myself incorporating the Impossible Whopper into my regular rotation. I don’t eat out very much, and I actually don’t love that fake char (??) flavor. (I do love those classic fast food pickles, though.) I also would rather patronize veg establishments when possible. But if I’m on the road and need something fast, I’ll be very happy to know the Whopper is available.

Whew, so… rant over! Let me leave you with a photo of Sam, our friends’ kitty. They’re out of town, so I stopped by their apartment to give Sam some attention. She’s pretty standoffish, but she at least came up to greet me when I came in the door! And she posed for some photos. I’ll take it. 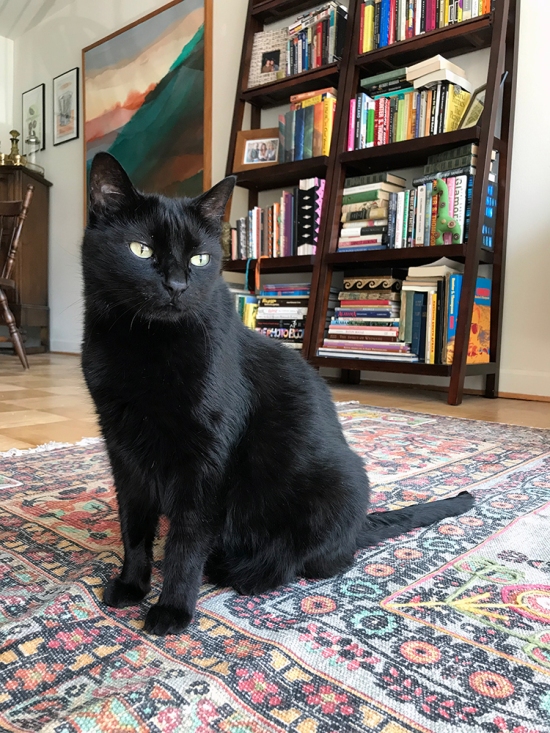