Although I really like where I live thanks to the area’s great walking paths, access to the woods, multiple pools, etc., I do not love how car-reliant it makes me. There just aren’t many places within easy walking distance. I suppose that’s more a symptom of American suburbia than my neighborhood in particular, but it still stinks. So I was bummed to learn that the nearest grocery store is closing as part of a village overhaul project. :( Granted, Global Foods is still more than two miles away, but at least it’s feasible to walk there. I’ve done it once or twice, as has Steven. And it’s definitely close enough for super-quick, “Oh crap; we need an onion” runs. Plus, because it’s an international market, it has all those fun ingredients you can’t find at the chain grocers: a million kinds of noodles, just as many types of rice, cheap and exciting produce. And bizarre canned fake meat.

I say “bizarre,” but I have a sincere and appreciative fondness for these visually unappealing cans of seitan-based meats, and I’ve bought them occasionally over the years (including this memorable experience with “seitan tidbits” eight years ago).

I have not, however, tried the canned mock duck before — at least not of my own preparation. (There’s a decent Thai place nearby that used to do a fun pineapple-y mock duck curry, but I think they’ve since taken it off the menu, unfortunately. ) So when I made a quick run to Global Foods today and discovered that all the shelf-stable foods were 20% off as part of a closing sale (sob), I picked up a small haul that included a can of mock duck and a can of — wait for it — faux pork. My god.

While the pork is still sitting in my pantry, I used the mock duck right quick. I figured it would be best as part of a stir fry, so I made this hoisin-based sauce and whipped up a stir fry with red bell peppers, broccoli, mock duck, and rice noodles. 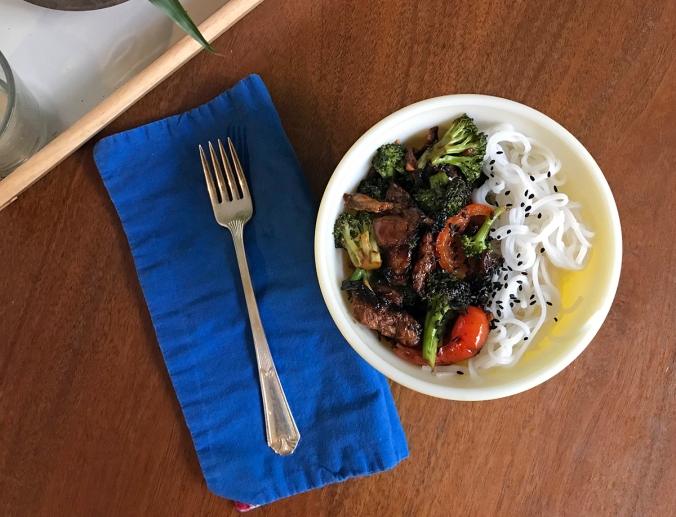 I’ve gotta say, I really dug (Digged? Should I just not use past-tense “dig” in this context?) the mock duck here! It’s definitely the same kind that Thai place uses; I could tell by the bizarre bumpy texture that I can only assume is meant to mimic real duck meat. Never having eaten a duck, I cannot verify how realistic those bumps are. I think the key was to drain it of its excess oil, both by putting it in a colander and by literally squeezing the chunks dry. I also sliced it into smaller pieces and lightly fried it before adding the sauce, so it had a chance to get nice and crispy. It’s got a gentle, almost sweet, gamey flavor, and the crispiness was a nice foil to the softer peppers. Plus, broccoli in a stir fry is always a home run; the space between the little nubbins soaks up all the sauce for a truly enjoyable bite.

So yeah, I’m well pleased with this dinner! Now I think I’m going to do what I failed to do last night: Make a cobbler for dessert. I’m craving something sweet after that salty dinner.

If you’ve used mock duck or mock pork before, what’s your favorite preparation for it?

Had a leisurely library wander this evening—the first in months and months. I’m so glad my library is open again; curbside pickup just doesn’t scratch the same itch that a trawl through the stacks does.
🥰
One a day, every day, for the next five to 10 years. 💊 Starving any microscopic cancer cells hiding out in my body by shutting down my estrogen production. 😬 #breastcancerunder40
Reunited with family and friends in the Ocean State last month—the perfect way to kick off summer. 🌞 #latergram
Golden pup in the golden hour. And my not-golden shadow. Oops.
My twinsel let me officiate her wedding! In verse! It was an unexpected and last-minute Zoom affair but we made it work and we made it rhyme and now she is wed. Congratulations, @rhiannondubs! Love you!
Sibs reunite; take to the streets
My parents visited a few weeks ago! We wore hats!
Shhh, nobody tell this 17-year cicada that kale isn’t trendy anymore. 🙄