Hi, hello, it’s me, just checking in from the United States, where we have a mass shooting every day and it’s A-OK because ~*~ the second amendment ~*~ and ~*~ the founding fathers wanted us to be able to defend ourselves~*~ and other excuses that should’ve been rendered meaningless seven years ago (but really many years before that) when a white man murdered 20-plus CHILDREN AT THEIR SCHOOL yet have remained valid because our spineless politicians are deep, deep, deep in the pockets of the gun lobby.

Sorry (not sorry), I know I’m supposed to talk about food but I’m just emptied of all emotions except indignant, incandescent, impotent rage right now.

I am bone-tired of pointless patriotism to a country that refuses to protect its people and instead props up white supremacist ideologies and lax gun laws that lead to dozens/hundreds/thousands of people losing their lives. (“Losing.” What a bloodless euphemism.) I am sick of being told I should pledge allegiance to a flag that does not protect people (literally punishes people) who don’t share my skin color yet offers protection and succor to white people like me who commit heinous, murderous, treacherous crimes. (He was troubled. He needed mental health treatment; it has nothing to do with guns. He was a good kid. We took him in alive. He’ll get his due process.)

But, y’know, life goes on (for me at least, until I’m the next victim of gun violence) so hey, I had some scones today. Steven made them this morning while I enjoyed some blessed hours of laziness, reading in bed with my pups.

They were cornmeal and blueberry. They were a little flat because Steven didn’t chill the coconut oil ahead of time, but if less-than-perfect scones are the worst part of my day, I have zero right to complain. (“My child was killed in Parkland and I should’ve done more to stop this most recent mass shooting. I failed my daughter.”)

I completed a hospice volunteer assignment, sitting quietly with a patient who is dying. I went to a brewery. I had beers with a friend who is dealing with his own heartbreak. I came home. (How many didn’t, today?)

All my thoughts are laced with expletives. I am out of words. 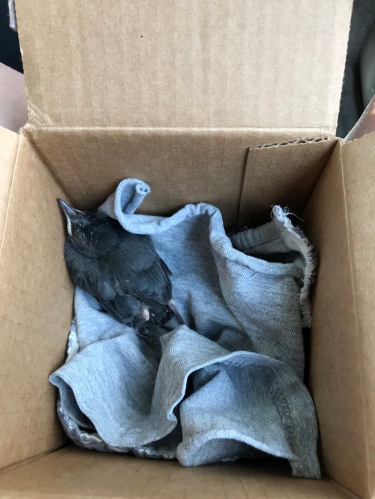 The catbird fledgling we found yesterday is at a local wildlife rehab center. He might have spinal trauma, or he might have West Nile virus, or he might just be too weak for this unforgiving world. I held him in a small box yesterday while we drove him the five and a half miles to the center. I listened to his mother cry, squawking indignantly as we picked her precious, weak, dying baby up off the ground and took him away. I don’t speak catbird but I heard her distress. I wanted to tell her, “I’m giving him the best chance I can. I’m trying to save him. I’m not stealing your baby. I want what’s best for him, just like you do.” He let out a few sad little peeps during the drive and I wanted to hold him close and tell him it would be okay; he would be okay.

I couldn’t tell him that.

I might die tomorrow, next week, next year, from a misogynist/white supremacist/guy with a grudge.

If I die from gun violence, please politicize my death.

I want action. I want change.

I know a lot of people who read my blog don’t live in the United States. If that’s you — what do you think and feel about the gun violence here?