This post is the first in a recurring series I’m calling Greener Habits, where I’ll share tips and recommendations for cultivating a more earth-friendly lifestyle. Let me know what you’d like to see in this space!

Whether you’re doing it to save money or to reduce your household’s garbage as you move toward a low-waste lifestyle, using up every scrap of food you buy (or grow!) is a great goal. According to NRDC, 40% of the food in the United States goes to waste.  FORTY PERCENT. Nearly half! It’s both a waste (of food and money) and a terrible irony, given the fact that many Americans don’t have access to healthy, fresh food in the first place.

In my quest to cut down on waste, I’ve cultivated some strategies for reducing food waste. Am I perfect? No. Am I getting better? Yes! In the past year especially, I’ve gotten much better at managing what’s in the fridge and not leaving scraps to languish until they become an unrecognizable puddle of green. Here’s how to avoid food waste in seven tips. 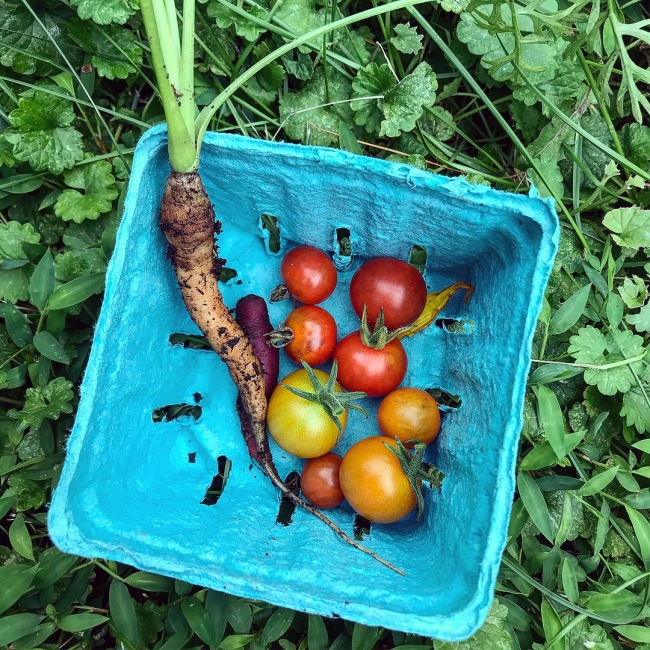 Learn to love your freezer.

This tip informs many of the following recommendations! As soon as you see your produce wilting or your herbs getting a little yellow, put ’em in the freezer. If you think, “Oh, maybe I’ll use it tomorrow,” ignore your procrastinating self and put it in the freezer. Don’t worry too much about how it’s packaged or wrapped up. Yes, there are plenty of best practices for freezing produce, but honestly? If you know yourself and know that you’re too lazy to properly blanch that windfall of cherry tomatoes from your garden before throwing ‘em in the freezer, just put them in raw. They’ll be fine for use in a soup or stew or other cooked dish later on. Using less-than-optimal freezing practices is still better than letting the freezable ingredients go to waste! (As long as food safety isn’t compromised.)

Use scraps in smoothies.

A while back, we had some long-forgotten spinach that was on the verge of going slimy, so Steven quickly blanched it and threw it in the freezer. Fast forward a couple months, when I was craving veggies. I grabbed that spinach out of the freezer and whizzed it up with a banana and some almond milk for an old-school green smoothie. Super easy, and I could’ve easily done the same with any non-frozen greens I wanted to use up. You can throw all sorts of odds and ends into a smoothie, frozen or not. Experiment with different fruits and veggies — you’d be surprised what you can get away with adding!

Berries. One day they’re perfectly ripe and juicy and basically summer concentrated in a brightly colored tiny orb… and the next day they’re squishy and smelling a little overripe (anathema to those of us who get queasy when anything smells remotely off). The solution? Well, you could certainly freeze them for later use, but you could ALSO whip ‘em up into a quick jam. (Find a quick jam recipe here and one with chia seeds here.)

Don’t have enough berries to make jam? I’ve used up small amounts of less-than-luscious berries by turning them into a simple syrup. It’s dead simple: Boil the berries with water and a little sugar until the liquid reduces, then strain the concoction. Use the syrup in a cocktail, mixed into sparkling water, or drizzled on oatmeal or ice cream. (Adjust sugar to your preferences, and feel free to add vanilla or other spices.)

This isn’t as exciting as some of the other tactics, but it’s important! Avoid getting to the point where your produce is wilty or overripe by following these tips from the EPA. Storing herbs in water has been a game-changer for me; when I buy a big bunch of cilantro from the Asian market, I can keep it fresh for weeks by standing it upright in a jar of water.

Depending on your pup’s (or kitty’s, or rabbit’s… etc.) preferences, she might enjoy the scraps you can’t bring yourself to eat or throw in a smoothie. For example, my dogs love the tops of strawberries, leaves and all. Experiment and see whether your companion animals enjoy (or turn up their noses at) various scraps, but be sure to avoid any foods that will make them sick.

You’ve seen it on Pinterest, and it’s true: You can indeed regrow certain veggies from the bare ends of their predecessors! I get a second (and sometimes third) life out of my green onions by sticking the bulbs into a jar of water. Legend says that celery and some lettuces will also regrow, but I’ve had little success with those.

I get a real big case of the warm fuzzies when I tip a container of scraps into the compost tumbler and realize that I’m going to use those same scraps in their compost form to grow new food in my garden next year. It’s a closed(ish) system! I know composting is not an option for some people; if you live in a small, shared apartment, it might be unfeasible.  (A few companies make countertop composters, although I have no personal experience with them.)

No option of your own? Some cities are implementing compost pickup, which is great — try urging your city or town to start a similar program! You could also collect scraps to share with someone who does have a compost bin. I’m lucky to have a robust compost program at work. And because I help run it, I get first dibs on that black gold when it’s ready throughout the year. It has made a noticeable difference in my garden; seeds I started indoors in a compost-vermiculite mix did far better than those I started in a potting soil-vermiculite mix.

BONUS TIP: Freeze your scraps! Avoid the stinky, slimy ooze of prematurely rotting vegetable matter by chucking your skins and ends and bits and bobs into a bowl in the freezer. Store ‘em till you’re ready to throw everything in the compost bin.

Not sure whether that scarred tomato will taste good? Check out Eat or Toss, a site that explains the science behind blemishes, bumps, and bruises on food items — and more importantly, tells you whether you can still eat them!

Note that this post contains a few affiliate links, which help me keep the lights on at no extra cost to you.

7 thoughts on “Greener Habits: 7 Tips for Avoiding Food Waste | How Not to Waste Food”

✅ 13.1
The goofy face of someone taking the day off for her #cancerversary and enjoying the obligatory cake, but also feeling silly about taking a photo *with* her cake, but also not caring that she looks like an awkward goof because life is too short to waste a second on vanity. ✌️
It is a truth universally acknowledged, that a single man in possession of a good fortune, must be in want of BRAAAAAAINS. 🧟‍♀️🪶📕
just a ghoul / just an ordinary ghoul
Well, we weren’t *intending* to add a third dog to the pack, but then we decided to foster this nugget through @homewardtrailsrescue, and, uh, things escalated quickly. When you know, you know. 💕 Welcome to the family, Franny! #4000beagles #adoptdontshop #fosterfail #envigobeagles #beaglesofinstagram
Betcha didn’t expect a back-to-school pic from this gal! 🍎 ✏️ 📚 But here I am, on day one of my masters program. 🤓
Belated snaps from Colorado! 🏔 Almost too much fun with my fave kiddos.
Happy Lughnasadh (or Lammas, if you prefer)! We’re halfway between the summer solstice and the autumnal equinox, and it’s time to celebrate the beginning of the harvest. 🌾
Sure, your friends might be “adults” who are “mature” and “successful,” but if they won’t play ridiculous and childish games in a lake with you in the middle of a hot summer day in Minnesota, then like, what’s the point? #crappiefest