Week Four: Occasions Week
We love a good celebration! This week focuses on those special occasions in your life.

On a rainy, chilly autumn Sunday, who’s thinking about celebrations?! Not me. So let’s go back a month or so to mid-August, when we celebrated Steven’s 30th birthday. 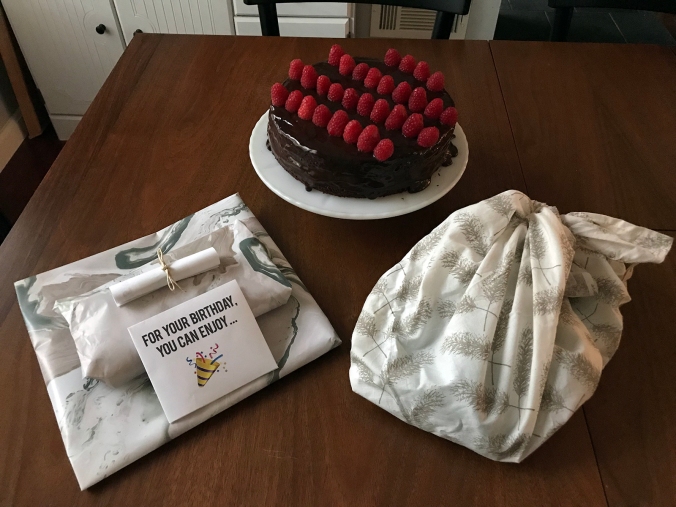 First, we celebrated his actual birthday with gifts and cake (and a homemade birthday card, per our tradition). When Steven requested a chocolate and raspberry cake, I knew exactly which one to make: the Raspberry Blackout Cake from Vegan with a Vengeance. Two layers of rich chocolate cake are sandwiched with raspberry jam and ganache, then topped with even more rich, fudgy ganache. Plus, you bake jam right into the cakes for added sweet berry deliciousness. I love this cake and I was glad for the chance to make it again. My presentation may not be impressive, but the flavor certainly was! (Steven’s mom also treated us to brunch at Barking Mad that weekend, which was lovely.) 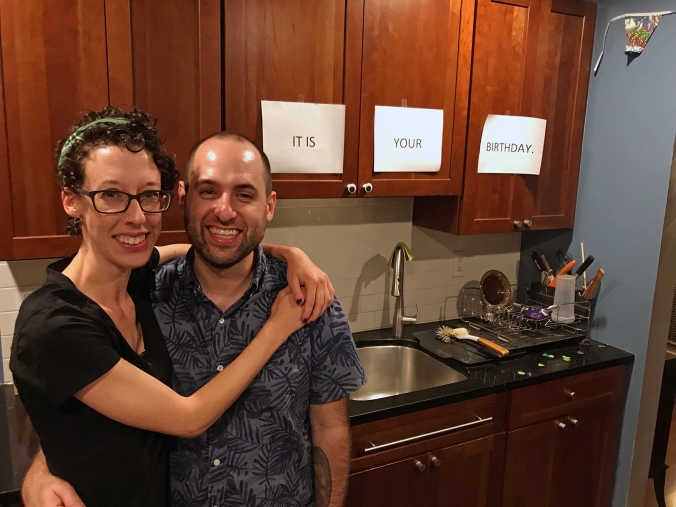 The festivities continued a couple weeks later with birthday bowling! It was a semi-surprise; I didn’t tell Steven the exact nature of our “fun birthday activity” until we were on the way there, although he did know we were going to be celebrating with friends. I booked two lanes for two hours, and we had a super-fun time bowling with a small group. Afterward, we headed home, where my dear friends Sara and Sabrina had secretly festooned the house with all sorts of decorations, childhood photos of Steven (!), and a hilarious Office-themed sign (above). I’d purchased a vegan ice cream cake from Roots market, our local natural foods/veg-friendly grocer, which everyone enjoyed. (I failed to photograph it, but it was pretty!) We had a wonderful night. 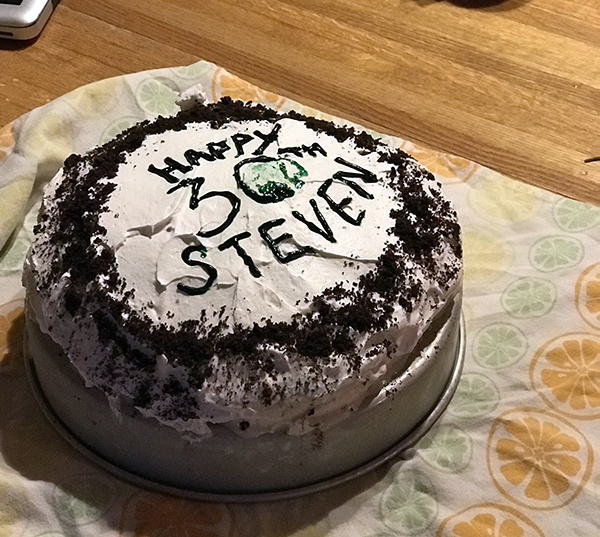 Our final celebration took place earlier this month. We were in Rhode Island to celebrate a million different birthdays: my aunt’s 70th, my grandma’s 85th, and my cousin’s 21st. So my parents figured, why not celebrate Steven’s 30th as well?! We picked up burritos and brought them to a local craft brewery, where we played arcade games and drank beers with family (and one of my very best friends, who was able to stop by for a little while). Then, the next evening, my sister served up a homemade vegan ice cream cake! She used crushed Oreos between layers of soy- and coconut-based ice creams, then topped the whole thing with a layer of So Delicious’ CocoWhip. It was heavenly. And it was better than the store-bought cake I’d served at his actual birthday party! I need to steal my sister’s technique.

All in all, we had three celebrations for Steven’s 30th. One per decade! Good thing he’s worth all the fuss. ;)