Week Three: Budget Week
This week, we’re going to prove once and for all that veganism is affordable!

Welcome to week three of VeganMoFo 2018! As you can see, this week’s prompt aims to demonstrate that veganism is affordable. I promise I’ll get to that, but first, time to put on my Debbie Downer hat!

Here’s the thing. I often cringe when the response to “But being vegan is expensive” is a quick, reflexive “No, it’s not!” Because sometimes… it is. Sometimes those of us who are financially comfortable might forget the challenges faced by folks on a very strict budget. We might play at budgeting (“I did a budget week and only spent $25 on food, go me!”), doing it out of curiosity or to prove a point, but if we have a financial cushion that means we don’t have to spend $25 on food for our family, I don’t think we can truly understand what it’s like to worry about every penny every day of every week of every month of every year.

Yes, you can buy bulk rice and beans and lentils and frozen veggies and eat perfectly fine, perfectly healthy vegan meals without breaking the bank, but what if you live in a food desert and don’t have a car and you literally can’t buy bulk rice and beans at the shops near you? What if they only sell one brand of canned beans, but it’s more expensive than a same-size can of ready-made meat chili or stew? And what if — heaven forbid — you actually want to eat MORE than rice and beans? Vegan convenience foods and snacks are not cheap, at least not in the U.S., and they’re not available at, say, your corner bodega.

It’s disingenuous to say that everybody can eat vegan on the cheap and still enjoy a plentiful, varied, healthy mix of meals. Some people certainly can. But not everyone. So please take my budget week recommendations with that in mind. If you want to incorporate more vegan foods into your diet but are constrained by your location, your schedule, or what’s in your wallet, please just do the best you can. Eating a little less meat or dairy or eggs is better than giving up on veg eating entirely. Thank you for trying. <3

Okay, removing my Debbie Downer hat now! So, what to expect this week? Tips for saving money on a vegan diet, along with a look at vegan items that can be expensive but don’t have to be… if you make them yourself or are a savvy shopper. First up: BREAD!

Oh, bread. I’ve yet to meet anyone who wouldn’t devour a slice of steaming homemade bread and feel like that’s the best thing they’ll eat all day. Yet poor maligned bread gets blamed for all sorts of health issues, its carby goodness cast aside during the diet fad du jour. Wheat gets a bad rap, gluten gets a bad rap, and meanwhile I firmly believe that bread is one of life’s simplest, most delicious pleasures.

I grew up on whole-wheat sandwich bread. None of that white stuff, despite my brother swearing it made the best grilled cheese based on what his friend’s mom made at her house. That habit has always stuck with me. And as an adult, I started trying breads other than the simple soft sandwich loaf I was used to eating. A garlicky ciabatta from the to-go grill at college, a loaf of sharp sourdough from the co-op when I lived in Madison… I’ll try it all. 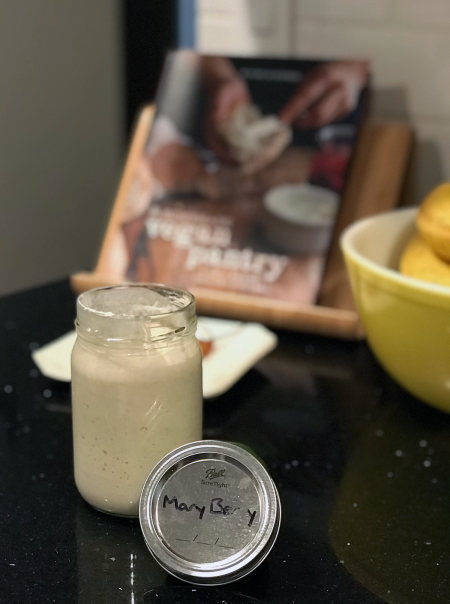 So it seems only natural that I’d start making it myself. Since last March, when a sweet friend hosted a sourdough workshop at her house and thoughtfully gifted us starters, I don’t think I’ve purchased a single loaf of bread. It’s a tradition to name your starter (and to pre-name it when you give it away), and my friend named mine Mary Berry. Mary’s got pride of place on my counter or in my fridge at all times!

(Yes, I know Paul Hollywood is the bread enthusiast, but let’s be real… I’d rather have Mary Berry in my home than Paul. Also, I’ve taken to calling my starter “Frankenberry” because she was almost dead at one point, and I revived her by adding some of these dried sourdough starter shards Steven had given me a few years ago. So now she’s a Frankenstein’s monster of two separate sourdough strains, plus whatever wild yeasts are floating around my own kitchen!)

Anyway, six months later, my sourdough breads are still not perfect. Some loaves are faultless, with a soft-yet-not-doughy interior, a beautifully crisp outer crust, and a lovely dark sheen. Others don’t rise well or are a little stodgy or, on one terrible occasion, are denser than a stack of bricks. Many factors can affect sourdough, but rarely do they create truly inedible loaves (brick aside).

And you know what? With a no-knead recipe (see below), they are really, really quick to prepare. You mix up the ingredients on day one, leave them to rise for a certain amount of time, give the dough a fold and a short second rise the next day, and bake them to bread-y perfection. There’s very little hands-on time required, although you do need to plan in advance. (There are plenty of similar recipes for regular yeast (not sourdough) breads, too!)

Homemade bread is cheap, too. Water is inexpensive, salt is cheap, and you can buy generic store-brand flour for not too much dough, if you’ll pardon the pun. And if you use a sourdough starter, you don’t even have to pay for yeast!

The downside, of course, is that homemade bread doesn’t last as long as most store-bought breads… both because it gets gobbled up by hungry carbophiles and because it contains no preservatives. But rarely in the past half year have I had a loaf go truly stale or moldy, and if it does get hard, you can just make your own breadcrumbs!

Have I sold you on homemade bread yet?! If so, here are tips and recipes.

No matter what kind of loaf you attempt, don’t be afraid of breadmaking! Experiment, have fun, and remember that even if your loaf isn’t perfect, it will almost never be entirely inedible. And it’ll make your house smell amazing while it’s baking.

🌸🌼🌸
Felt like an actual human in the actual world this weekend. Saw people; did things; bought plants.
Calling my 🦇 children at dusk last night; did not know @stevenyenzer had his phone out. Thankfully there is no audio.
One of these animals is turning 35 next week, and it’s not the horse! 😅
The world feels dark and scary right now, so here’s Mattie outdoors in a harness to brighten your Monday. 💜
Just a gal—double-masked, wearing a paper gown and freezing—taking a selfie at the breast center while hoping for clear scans.
Went to a warehouse that resells furniture used in model homes; felt like it was a major outing. #2022
✨ how lucky you are to be alive right now ✨
❤️💚❤️