Week Two: Dietary & Lifestyle Restrictions
We love eating all the vegan food we can, but it’s good to learn how to cook for those who may have allergies or intolerances — and challenge ourselves in the process.

Another day, another way to use oats. This one is a more novel usage than yesterday’s rather predictable oatmeal cookies: nuggets! More specifically, chickpea nuggets made with oat flour.

This super-simple recipe from the Kitchn relies on aquafaba to bind chickpeas and oat flour together,  then incorporates a simple toasted panko coating for a little crunch. I was wary at first; I’ve had plenty of nugget-making experiences where the coating just won’t stick or involves a complicated milk-bath-plus-flour-plus-roll-in-the-coating technique that leaves you with crummy fingers and soggy nuggets. But this method worked out great! Everything came together quickly and with no hassle at all. Plus, because they’re baked, the nuggets won’t fall apart in the frying pan. 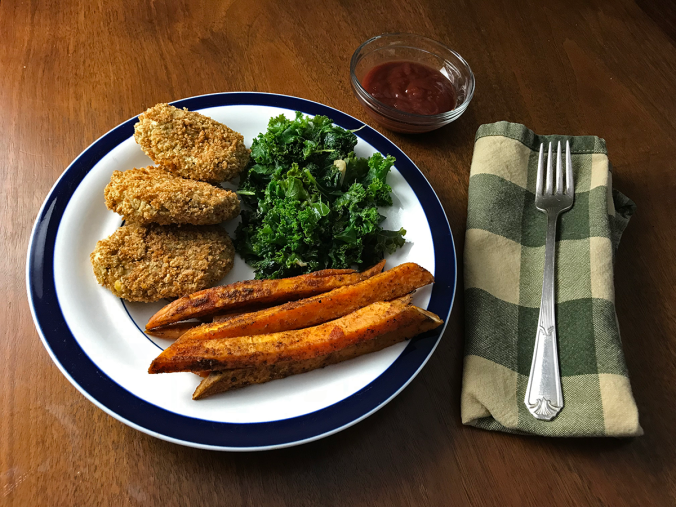 A few reviewers remarked that the nuggets were a bit bland (presumably because this is a kid-focused recipe), so I opted to season mine with a big scoop of Italian seasoning that I’ve probably had for seven years. *insert embarrassed-face emoji here* If anything, my nuggets were a little over seasoned! But not in a bad way. I served them with some homemade baked sweet potato fries and a big pile of sautéed kale. An easy, healthy dinner.

This is a great recipe — there’s no vital wheat gluten involved, so if you use gluten-free oats and gluten-free panko or breadcrumbs, you can easily make these gluten-free. Of course, there’s a bit of a trade-off in texture compared to a more traditional seitan-based nugget — the insides are a little soft, though not unpleasantly so — but for a quick, kid-friendly recipe that uses minimal ingredients, I’d say it’s worth it. And if you’re thinking, “But I don’t have oat flour in my pantry,” don’t worry! You simply grind up rolled oats in your food processor or the dry attachment of a Vitamix. (Both I and my grocery store were out of rolled oats, so I used ground quick oats instead and they worked a treat.)

So, oat flour-based chickpea nuggets? A total win. What’s your most unexpected use of oats?