Day One: Introduce you!

Tell us a bit about you, your veganism, and what you like to cook and eat!

Hello, hi, it’s me, your absentee blogger dropping in for the annual Vegan Month of Food, aka VeganMoFo. This is my ninth year (!) participating, and things are gonna be a little different this year for a few reasons.

For one, I haven’t fully recovered from the  Great Cooking Slump of Late 2017. Although it would be unfair to say that last year’s MoFo caused my sudden and extreme dislike of planning/prepping/cooking dinner, it certainly didn’t help. Dinners these days are typically planned and cooked by one or both of us, with Steven often prepping ingredients during the day (he works from home) and me doing the actual cooking when I get home (I do not work from home). Last winter and spring we did a lot of meal planning on Sundays, but that’s actually gone by the wayside this summer. Instead, I go crazy at the farmers market on Saturdays and then plan simple, produce-forward meals based around what I buy.  So, really, there’s not a lot of innovation happening in my kitchen, and I’m certainly not developing original recipes left and right. 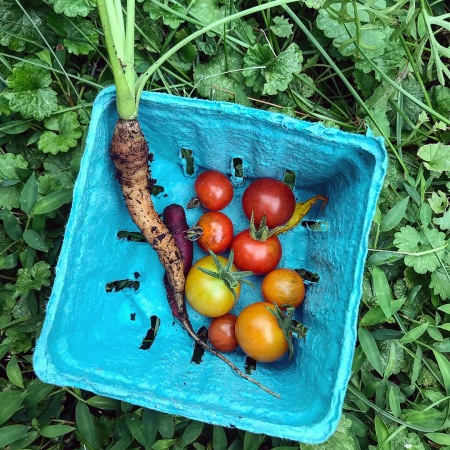 And the second reason my MoFo experience will be different? Well, I’m just not that into food blogging anymore. Don’t get me wrong; I still really enjoy blogging as a practice (despite my consistent inability to be, um, consistent). But my focus has shifted. Veganism — or more accurately, vegan food — has become so much more mainstream in the nine years I’ve been vegan that I feel less called to talk about it. Vegan-centric websites and social media accounts and blogs are so abundant, and I don’t really feel like I have too much to add in this space. There are plenty of people doing the vegan blogging/recipe-development thing full-time, and I appreciate their devotion. And that’s why, over the past few years, I’ve slowly bowed out of the recipe-centric space.

But! I am not going anywhere! Because I still have Things to Say. I feel more strongly than ever that my vegan lifestyle is inextricable from other ethical practices that call me: embracing a waste-free lifestyle; growing my own food; buying only ethically produced items; practicing some form of minimalism. And on top of that, during the past few years I’ve gotten to a financially sound-enough position to indulge my lifelong love of travel, and I enjoy the challenge of remaining environmentally conscious (and, obviously, vegan) while traveling. All of these hobbies and practices tie into veganism, and those intersections are what I hope to explore in the future. (And, really, have been doing for some time now.) That’s the content I most enjoy reading these days, so naturally it’s what I most enjoy writing about.

So, self-indulgent self-reflection out of the way, what can you expect during this VeganMoFo? Me being relaxed and talking about food! I’m thinking that as my blog moves away from a focus on food, VeganMoFo can become a more enjoyable opportunity for me to have an annual dipping-of-the-toes back into that space… but with some changes. Fewer original recipes; more reviews. A more relaxed interpretation of the themes. (This year, I’ll be loosely following the weekly themes but not the daily ones.) Me being lighter, less uptight and less of a perfectionist… although I sincerely hope not to break my nine-month streak of posting every day during MoFo! ;)

And on the aforementioned lighter note, how about some rapid-fire answers to the questions for today’s prompt? :) I don’t always include personal details here, but I’m not being purposefully cagy or anything. Here are the basics: 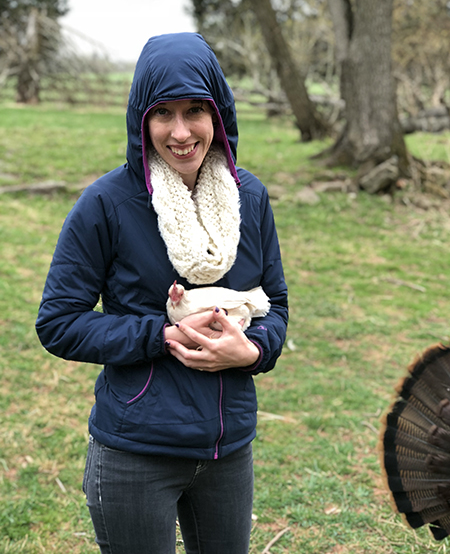 I’m Kelly and I’m 31. (That’s me with a sweet lil hen at Poplar Spring Animal Sanctuary earlier this year.) I live in suburban Maryland with my partner, Steven, and our two dogs, Moria and Rosie. I grew up in Rhode Island (and visit family there frequently), went to school in Minnesota, and lived in Wisconsin for three and a half years before moving here. I’m a senior editor for a big animal welfare organization. (Yes, I get a paycheck for writing about animal issues, and yes, it’s great.) I occasionally pick up some freelance writing and editing. (Need help? Let’s talk!) I’ve been vegan for just about nine years and was vegetarian for four or five before that. I’m vegan for the animals, but environmentalism is also important to me. The health benefits are just an added bonus.

I love vegan doughnuts and traveling… and combining the two, preferably during a solo trip. In my downtime, I’m usually reading (friend me on Goodreads!), playing with my pups, or rewatching The Office for the millionth time. I dabble in lots of different crafts and have a pitifully neglected Etsy store. Volunteerism is really important to me, along with making charitable donations. I’m a penny-pincher but I’m not cheap. I’m patiently waiting for a vegan version of angel food cake and will happily recipe-test for any culinary geniuses out there who are cracking the code.

And that’s enough of that. Happy MoFo, friends!

✨ how lucky you are to be alive right now ✨
❤️💚❤️
Winter break—GO!
How is she so perfect?! 😻
Enjoying some extra cozy vibes tonight! ☕️ #hygge
🍁🔥🍁 Fire pit weather! 🍁🔥🍁
I roundly reject the notion that my ~cAnCeR jOuRnEy~ taught me anything, but I do acknowledge that I’ve consciously chosen to extract some bits of meaning from it and that I’ve chosen to realign my priorities in small and subtle ways in the past year. I’ve also re-examined my natural inclination to plan for the future, to save my pennies and pass up the small indulgences in favor of nebulous future large indulgences. Because, sorry folks, the future is not guaranteed, and those large indulgences… you might not get to enjoy them. 🤷🏻‍♀️ It’s cliche as hell to say, but there it is.
It’s my #cancerversary today! (That exclamation point is doing a lot of work there.) @stevenyenzer and I took the day off and drove up to @vegantreats and picked up this cake because if there’s one thing I’ve learned from the internet #cancerfam, it’s that you celebrate any time you can after a cancer diagnosis! (Shout-out to @thecancerpatient and @ohyouresotough and @cancerforbreakfast for making cancer a little bit less scary and lonely.) I choose to commemorate today—the day every single bit of my life shifted so very much—and I also plan to celebrate the day I finished active treatment in May.
A Halloweekend for the books! 🎃 Surprise visit from @thegrandem, spooooky gift exchange and virtual costume party with the Carleton gang, and the first annual Gingko Gathering (complete with cyanotype leaf prints)! 🍂