When I first accepted my job offer, S and I started packing — in lite mode. By which I mean we sat in our bedroom watching back-to-back (…to back) episodes of Parks & Rec while leisurely putting off-season clothes in suitcases. Then we transitioned into medium mode, where we taped together boxes, packed up the non-essentials, and listed our furniture on Craigslist. But now, with a week (!) till moving day, it’s time for hardcore packing mode.

By which I mean kitchen packing mode.

Today I started cleaning out the fridge. It wasn’t too bad, but there were some notable finds in there that made me feel ashamed and wasteful. And also like a weirdo. For example, stuck in the back was sticky bag of really old sliced almonds. Why was the bag sticky? Because I put an unfinished glass of red wine in the fridge, forgot about it, and spilled it while rooting around on the top shelf last week. Oops. 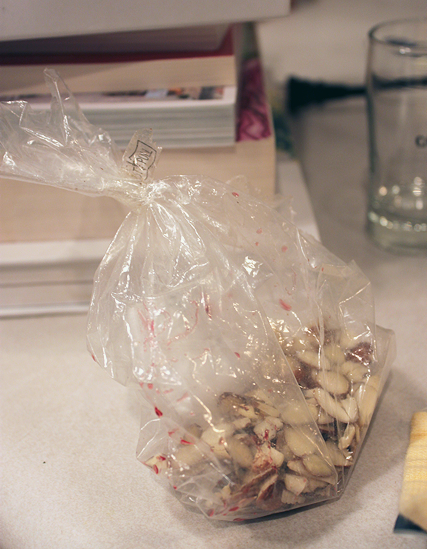 Also, I found half a lime. The rind was extremely hard and brittle, but because I stored it face-down, the actual lime was okay. I squeezed it into the citrus chia water I like to keep in my fridge for a before/after-run refreshment. (Yes, I go running now. Who am I.)

Then there was a container of what I can only assume is oatmeal. WTF, y’all. I rarely eat oatmeal at home (it’s an at-work breakfast), and when I do, I don’t have leftovers. It might be from a month ago when I was rushing to eat breakfast before heading off to an all-day volunteer event, but I dunno. 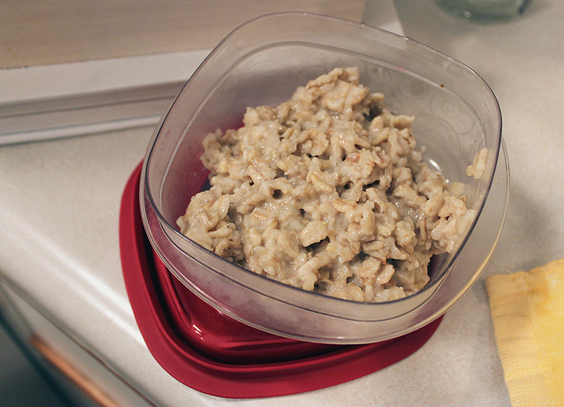 Must be oatmeal, right?!

I also discovered this tiny bowl of sliced green onions. They did not look or smell like a particularly appetizing garnish for any dish.

Aaand finally, I found a ridiculously small amount of coconut cream left in its can. Seriously, Past Kelly, why did you save that?! No one ever wants that small a serving of coconut cream. Ugh.

That’s half a tablespoon, tops.

This was, obviously, not all I found. The freezer housed a treasure trove of mysterious creamy concoctions, mostly sauces that we never finished and I optimistically assumed would seem appealing later on. (Spoiler: They rarely do.)

Up next? Actually cleaning the fridge. Those sticky red wine spots ain’t gonna scrub themselves.

One thought on “Things I Found While Cleaning Out My Refrigerator”