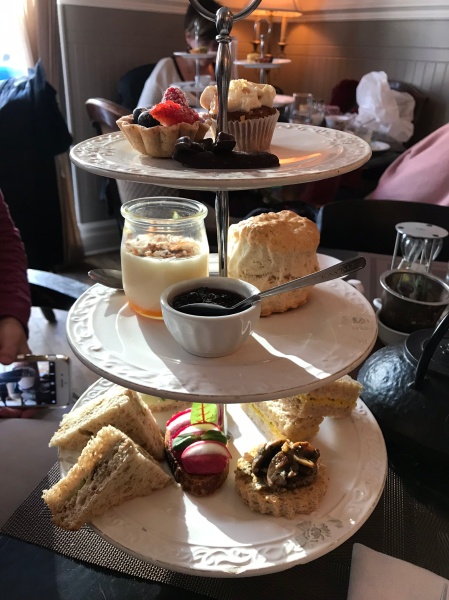 For years I’ve read fellow vegan blogger Jenny’s accounts of the vegan afternoon teas she’s enjoyed all over the world (okay, mostly the UK) and wistfully wished for a tea of mine own. I’ve salivated over the savories and pined over the pastries, dreaming of a day when I’d get three tiers of treats all to myself.

My chance nearly came this past spring. For my birthday, Steven’s mom very sweetly gifted me (and Steven!) passes to enjoy a special vegan afternoon tea being offered at a tea shop in Ellicott City, a nearby historic mill town. The shop doesn’t typically offer vegan snacks but was partnering with a local vegan society for a one-off event, and I was quite excited to attend. Then the owner had an emergency in the family and had to reschedule the event, understandably. Before she could reschedule, climate change took its toll: A series of horrific floods swept through Ellicott City, and the tea shop flooded and had to close, likely permanently. Sad for me, but truly tragic for the town. My afternoon tea dreams were on hold.

And then Steven and I booked a winter trip to Montréal. I’d been itching for a December trip to somewhere in Europe where we could visit Christmas markets, but it wasn’t in the cards this year. A long weekend in Montréal was a more than passable substitute, and when a search for “vegan afternoon tea in Montréal” led me to discover that sweet tea shop Le Parloir offered a vegan afternoon tea, I was sold. I made a reservation and counted down the days till three tiers of treats would be mine.

We’d booked our afternoon tea for 1:00 p.m. on a Saturday and found the tea shop about half full when we arrived. After being seated, we waited about five or so minutes before getting the menu and a run-down of how to order, and that’s pretty indicative of the overall pace at Le Parloir: relaxed! This is the time to chill out, get cozy, and while away a few hours. (We were glad to escape from the biting cold outdoors; the temperature hovered around 5˚F on that day!)

While you can order vegan a la carte options, we went straight for the full three-course vegan afternoon tea, served on (yess!) a three-tier cake stand. Priced around $25 Canadian, it was a bargain thanks to the favorable exchange rate for us Americans. (How rare it is I get to say that…!) Steven opted for a black chai blend, while I chose a jasmine green tea. Our piping hot iron pots arrived in short order, complete with hourglasses to time the steepage. Steven enjoyed his chai; my jasmine wasn’t quite as flavorful as I prefer, but still fine. We sipped our teas and did some covert people-watching while waiting for our trays. Interestingly, of the three other pairs of diners present during our meal, at least two people ordered the vegan tea, and one ordered a vegetarian spread. :)

A woman who I assume to be the shop owner delivered the vegan tray to a lady sitting behind us, explaining each dish, but we unfortunately didn’t get the full run-down when the waitress came with our cake stands a bit later. No matter; the food didn’t really require much explanation.

For the savories, we enjoyed five tidbits: a savory tart with walnut-mushroom pâté, a slice of toasty bread with beetroot hummus and radish slices, a (heart-shaped!) open-faced cucumber-cream cheese sandwich, two egg-salad finger sandwiches, and — my favorite — two tangy, mustard-y, pickle-laden sandwich triangles. I’m not sure exactly what the filling was on those latter two sandwiches; I’d guess it might’ve been chickpea-based, but it was really tasty, especially served on a soft, nutty wheat bread.

We slowly munched our way through the savories before moving on to the middle tray: the scone course! We received one towering scone apiece, and a good ‘un it was. Flaky, nice and tall, just barely sweet, with a tender crumb. Scone perfection, just about. The scones came with a small pot of blueberry compote, which I found just a tad too sweet. (A bit of cream would have helped cut through the sugar!) The tray also included a cute little pot of panna cotta, the only misstep of our entire afternoon tea. I think this dish relied on agar to thicken it — too much agar. It was basically a solid, flavorless white block — not terribly appetizing. I dutifully dug through mine to discover an absolutely perfect mango-passionfruit coulis at the bottom, a tangy-sweet sauce that paired really nicely with the toasted coconut flakes sprinkled atop the panna cotta. This would’ve been really lovely if the middle layer were a softer vanilla pudding!

At last we reached the dessert plate. Stomachs straining, we indulged in three treats: a tiny vanilla cupcake with almost painfully rich and thick frosting, a sweet little berry mousse tart topped with fresh berries, and a few candied orange jelly slices coated in rich dark chocolate. I could take or leave the cupcake, but not through any fault of its own; I’m just ambivalent about cupcakes in general these days. The other two sweets were lovely, and the dark chocolate oranges made for a wonderful last bite. I was pleased to pace myself enough to finish everything — it was a lot of food, all told!

I’m so glad we were able to make it to Le Parloir to enjoy a vegan afternoon tea in Montréal! I enjoyed the whole experience, from the kitschy-cute décor to the slow pace to the tasty little nibbles we enjoyed. And it’s fair to say that my appetite for afternoon tea will only increase now that I’ve had my first taste!

🍁🔥🍁 Fire pit weather! 🍁🔥🍁
I roundly reject the notion that my ~cAnCeR jOuRnEy~ taught me anything, but I do acknowledge that I’ve consciously chosen to extract some bits of meaning from it and that I’ve chosen to realign my priorities in small and subtle ways in the past year. I’ve also re-examined my natural inclination to plan for the future, to save my pennies and pass up the small indulgences in favor of nebulous future large indulgences. Because, sorry folks, the future is not guaranteed, and those large indulgences… you might not get to enjoy them. 🤷🏻‍♀️ It’s cliche as hell to say, but there it is.
It’s my #cancerversary today! (That exclamation point is doing a lot of work there.) @stevenyenzer and I took the day off and drove up to @vegantreats and picked up this cake because if there’s one thing I’ve learned from the internet #cancerfam, it’s that you celebrate any time you can after a cancer diagnosis! (Shout-out to @thecancerpatient and @ohyouresotough and @cancerforbreakfast for making cancer a little bit less scary and lonely.) I choose to commemorate today—the day every single bit of my life shifted so very much—and I also plan to celebrate the day I finished active treatment in May.
A Halloweekend for the books! 🎃 Surprise visit from @thegrandem, spooooky gift exchange and virtual costume party with the Carleton gang, and the first annual Gingko Gathering (complete with cyanotype leaf prints)! 🍂
Forget Valentine’s Day—Halloween chocolates are what it’s all about! 🎃 Thanks for the sweet treats, @stevenyenzer. 🍫 (P.S. They came with adorable stickers too. @vegantreats always kills it!) 👻
Made #vegan buchteln using @seitanismymotor’s excellent recipe to celebrate German week on @britishbakeoff! They are soft, pillowy, just-sweet-enough little yeasted buns. I filled mine with my dad’s homemade blueberry jam.
Today is metastatic breast cancer awareness day, but you probably didn’t know that. Corporations love to slap a pink ribbon on whatever product they’re hawking during the 31 days of breast cancer awareness month, but rarely do they make substantive donations to organizations that actually fund cancer research—and most of them will not mention anything about #metastaticbreastcancer.
Lotsa solid brews at #snallygaster this year! 🍻 (Also, post-chemo hair reminding me why I loved a short cut back in the day!)
10 years (plus a few days 😬) ago, @stevenyenzer and I went to a @shelterfromthestormrescue adoption clinic in Madison. I knew I wanted a dog but wasn’t sure how to choose among all the cuties needing homes. The clinic was held at a Petsmart and it was busy—lots of barking and laughter and whining and general loudness. Pups jumped up on their enclosures, asking for attention. Who to pick?! And then I saw the littlest Ewok-with-a-smidge-of-Wookiee sitting quietly in a corner, out of the fray. An occasional wallflower myself, I felt for her. Steven and I took her from her pen and sat in a corner with her, petting her gently and feeling her out. Then, suddenly, all the other dogs started barking at once, startling both me and my little Ewok. Scared, she hopped into Steven’s lap for protection. And that was it—she was ours. ♥️