Happy Saturday! We just returned home from DC VegFest, and it was loads of fun. We’d intended to arrive early to procure a swag bag, buttt… we overslept! Last night I was all, “Pshh, I never sleep past 8:00 on the weekends! It’ll be fiiine! We’ll have ample time to get there!”

And then I woke up this morning, checked the clock, and saw that it was 9:30. Holy moly! I’d heard that the swag bags went pretty fast last year (as in well before the opening time of 11:00), so we quickly gave up hope of making it in time to snag one (it’s a ten-minute drive to the metro station and then nearly an hour-long metro trip to Yard Park). When we arrived around 11:15, though, there was still a long line, meaning that there were still bags available. It was moving quickly, so we waited, enjoying the antics of all the dogs people had brought along for the day. 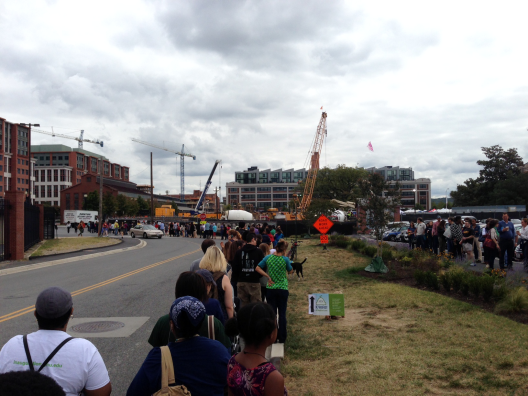 When we were about 15 or so people from the front, a VegFest volunteer informed us that they’d run out of bags. Nooooo! We were so close! Demoralized, we entered the festival, which was already packed.

We hadn’t eaten before leaving, so we made a beeline for food. There were quite a few food trucks, and we opted for the one with the shortest line. We each got a tofu banh mi sandwich from the Bonmi food truck. They were fine and filling, but nothing spectacular.

Our bellies full, we spent some time wandering the festival, checking out the stalls and snagging free samples of various “meats,” nut-based cheeses, and beverages. I was delighted to see a tent with TONS of delicious desserts from Vegan Treats, but appalled that the line was already snaking halfway down the festival grounds! Apparently, everyone loves VT as much as I do.

A smile of genuine delight.

We met up with a coworker and her husband, watched a speaker, and did some more snacking and sampling. We particularly enjoyed the Viana meats we tried; they were really flavorful. We also liked Gouter‘s raw “pumpkin spice latte” tonics made with almond milk, spices, and cold-brew coffee. Yummy!

Since the line wasn’t getting any shorter, we decided to bite the bullet and wait in line for Vegan Treats. I could NOT pass up the chance to stock up on vegan doughnuts, after all! S graciously held our place while the three of us walked around and watched part of another speaker’s presentation.

I nearly panicked when we reached the front of the line—there were so many options! We’d scoped it out before and decided on a pumpkin whoopee pie and a pumpkin creme doughnut, and then we added a pumpkin cheesecake on a stick and a speculoos (!) cheesecake on a stick! At the last minute, I asked for one of the chocolate doughnuts I fell in love with at Loving Hut so many, um, weeks ago.

We were pretty full from our snacks and lunch, so we didn’t make much of a dent in our purchases. S and I ate about half the whoopee pie and called it quits. At that point, we were all a bit tired and VegFested out, so we peaced out and headed home.

All in all, VegFest was a great event. I think they could’ve realized earlier that they’d run out of bags soon and let those of us in line know so we didn’t stand there for no reason, but that was really the only hiccup. And the fact that it was so crowded only speaks to the growing draw of the veg movement, so I can’t even complain about that. There was a great selection of exhibitors, free samples, and items to purchase. Next year, I’ll suck it up, set my alarm, and get there early!

Have you attended any vegan or vegetarian festivals?

Bonus! I forgot to post this photo of the pumpkin cheesecake on a stick. The speculoos version is just off-screen… :)

7 thoughts on “DC Vegfest, or, Everybody Loves Vegan Treats”